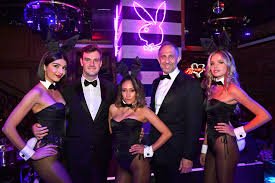 Yes it is true according to a press release published 24 September 2020.

A couple of months back they announced they were getting in the CBD game and now they are the self appointed pivot point for , “cannabis law reform and advocacy” according to this press release

We find it a little hard to swallow but they appear to have teamed up with NORML, LPP, MPP and others. Understood that they helped NORML get off the ground back in the day but it is time to move on.

If I were a woman i have to say i’d find it more than insulting, as a male of the species this author just finds the gaudy tackiness both exploitative and somewhat disturbing in 2020.

It’s now 2020 and 50…. yes 50 years ago women like Susan Brownmiller in 1970 were confronting Hugh Hefner on The Dick Cavett Show. Have we learnt absolutely nothing ?

“Since its inception, Playboy has fought for cultural progress rooted in the core values of equality, freedom of expression, and the idea that pleasure is a fundamental human right. For far too long, our nation’s policy toward cannabis has been backward and punitive, leading to decades of injustice in our legal system and to social stigma and shame,” said Rachel Webber, CMO of Playboy Enterprises. “As stewards of an iconic champion of progress, it is our duty to carry on the work Playboy began over five decades ago, by advocating for marijuana law reform and promoting the positive roles cannabis plays in people’s lives as a form of recreation, free expression, and health. We are proud to commit our platforms and resources to support this cause and we are grateful for the partnership and support of the organizations playing leading roles in advocating for legislative reform, social justice, and cultural destigmatization.”

Playboy has long advocated for cannabis law reform and pushed the conversation forward. Fifty years ago this year, in 1970, Playboy became the proud founding donor of the National Organization for the Reform of Marijuana Laws (NORML). Notably, in 1969, Playboy published a professional assessment entitled “Pot: A Rational Approach,” and consistently, the pages of Playboy have declared boldly that the “war on drugs” and similar actions have created systemic inequality including in our criminal justice system.

Today, Playboy is doubling down on its efforts in support of cannabis reform and advocacy programs.

In addition to its decades-long advocacy, Playboy has also recently hosted a series of expert panel discussions on cannabis reform at Playhouse pop-ups, events with a renowned cannabis chef, and social media activations including a Twitter AMA in honor of 4/20. Playboy also launched its cannabis content hub, a place for readers to learn and delve deeper into the many angles of cannabis culture and consumption, including through Playboy Advisor episodes on cannabis and sex and an editorial column called The Dope Tutor. Playboy also recently launched “CBD by Playboy,” a high-quality, broad-spectrum CBD-based product line specially designed to enhance intimacy and sexual pleasure.

Playboy’s cannabis law reform advocacy builds upon the company’s action plan on social justice for Black Americans announced in June. As part of this work, Playboy relaunched the Playboy Foundation and established an initial $250,000 fund to support organizations fighting injustice, and immediately donated $150,000 to organizations committed to Black liberation.

Playboy is committed to pushing boundaries through its editorial and product business, having the important conversations about social justice and freedoms, and doing the work to ensure Pleasure for All.

ABOUT PLAYBOY ENTERPRISESPlayboy Enterprises today reaches a wide global audience through a diverse portfolio of consumer products, content, gaming and hospitality offerings. Originally founded in 1953 as a sophisticated and cheeky men’s magazine with a reputation for challenging taboos, Playboy has grown into a global lifestyle brand with a strong consumer business focused on four categories comprising The Pleasure Lifestyle: Sexual Wellness, Apparel & Accessories, Home & Hospitality and Grooming, Beauty & Skincare. Under its mission of Pleasure for All, the 67-year-old Playboy brand drives more than $3 billion in annual sales at retail across 180 countries. With 97% unaided global brand recognition and nearly 50 million social media fans worldwide, Playboy remains one of the most iconic brands in history.