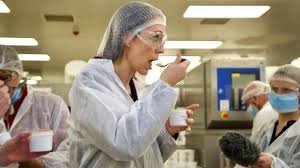 New Zealand’s prime minister is taking a bite out of the country’s cannabis debate ahead of next month’s so-called reefer-endum.

Kiwis head to the polls on Oct. 17 to vote on the country’s next government and also decide whether or not to legalize recreational marijuana. Jacinda Ardern, New Zealand’s wildly popular leader, has avoided weighing in on the subject but may have offering up a tantalizing clue on where she stands on the matter this week.

During a trip to Massey University’s food laboratories north of Wellington this week, Ardern posed with throngs of supporters and well-wishers before sinking her teeth into a frosty spoonful of hemp ice cream, according to the Daily Mail.

The verdict? “Creamy,” she said approvingly, after she was done.