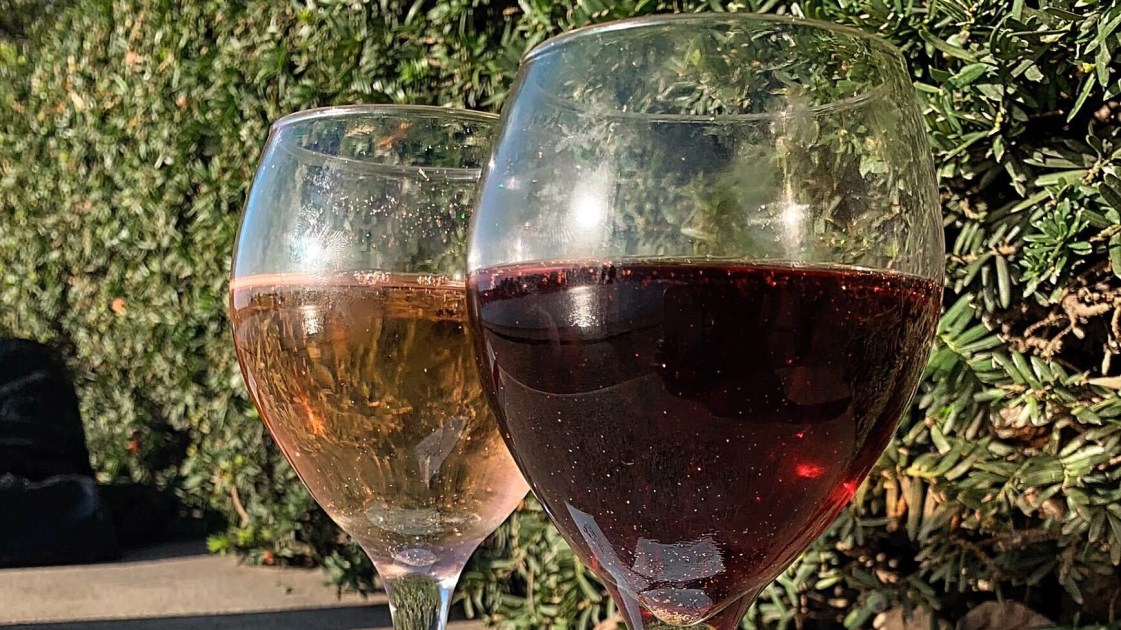 Glitter-filled wines are coming to Philadelphia from two young entrepreneurs on a mission to create cute, sweet, delicious vintages people can pick up without shame.

Paige Hughes, 26, and Aliesha Clark, 28, are launching Forgiven Wine this this Saturday at an outdoor picnic event along Kelly Drive. Folks who registered will be able to taste the label’s first offerings, a shimmering sweet rosé blend and a CBD-infused red.

Neither woman has sommelier or vintner backgrounds, and that’s the point. Forgiven Wine aims to be an approachable option for people who want a sweet wine to pair with desserts and are tired of being misled by flashy packaging.

“Going into a store and finding a really cute, girly bottle that was sweet was really hard,” Hughes said, explaining that she and Clark were often disappointed with their picks.

When they embarked on the journey to create their own wine brand last year, they discovered something else was really hard: getting winemakers to take seriously and agree to produce a super sweet blend.

A vineyard owner in California, a man, told them sweet wine wasn’t what’s popular, Clark said. “We were like, ‘On the contrary.’”

After the belittling conversation, they had similar interactions with every wine producer who wasn’t a woman, Clark recalled. “We couldn’t get a word in. Everything said was, ‘Do you guys even know what you’re doing?’”

The disconnect is steeped in cultural nuance. Hughes said she found that surveying her colleagues, friends and family, most of whom were Black, nobody wanted a dry wine — and studies show that’s common.

According to a 2014 study by Purdue University, Black wine consumers are neglected by brand marketing. Black wine drinkers are also 241% more likely to spend more than $20 at the wine store. Despite that, researchers said, “wine industry strategies don’t appear to connect with this market segment.”

Black winemakers and vineyard owners are underrepresented. The Association of African-American Vintners was founded in 2002 and today has about 40 members, 12 of which are wineries. The United States has more than 8,700 wineries according to Wine Business Monthly and Wines Vines Analytics.

And, the industry is dominated by men. In California, where about 90% of American wine is produced, women represent only 14% of lead winemakers. That’s up from less than 10% in 2015.

Andréa and Robin McBride of the McBride Sisters Wine Collection, also Black women, pointed to an industry publication which featured a 2019 cover story showcasing 50 industry leaders. Zero of them were Black women.

Clark and Hughes said industry gatekeepers’ attempts to discourage them only empowered them.

“We were starting to realize that we could do the same exact thing they were doing,” Hughes said, “[while] kicking down the door they didn’t want to open up.”

Hughes, a trained paralegal and nonprofit founder, and Clark, a licensed social worker, embarked on a cross-country search for a vintner to work with, and ended up back at home.

The pair found a woman-owned wine producer just outside of Philadelphia willing and able to fulfill their sweet dreams. Each of them created one blend. Hughes worked on a rosé she describes as crisp, light and fruity. Clark tasted seven blends before deciding on her smooth, sweet red, one infused with organic CBD and one without.

To introduce their Philly-based wine to the world, the Forgiven team is hosting a women-only launch event on the Schuylkill River waterfront this weekend.

Registration for the social distancing-friendly shindig is now closed. It’ll feature charcuterie and wine tastings, and each guest will receive a complimentary bottle of Forgiven wine and a goodie bag. After the product launch, consumers can purchase Forgiven Wine online, through Instagram or via Facebook. The rosé and sweet red are $14 while the CBD-infused sweet red blend is $10.

Next up, the duo wants to open their own wine garden in the spring. And they have a message for any other women and people of color venturing into the wine distribution business.

“I’ve seen as minority women, we’re at a really big disadvantage and sort of a glass ceiling where we’re expected to sort of stay small,” Clark said. “But we don’t have to.”