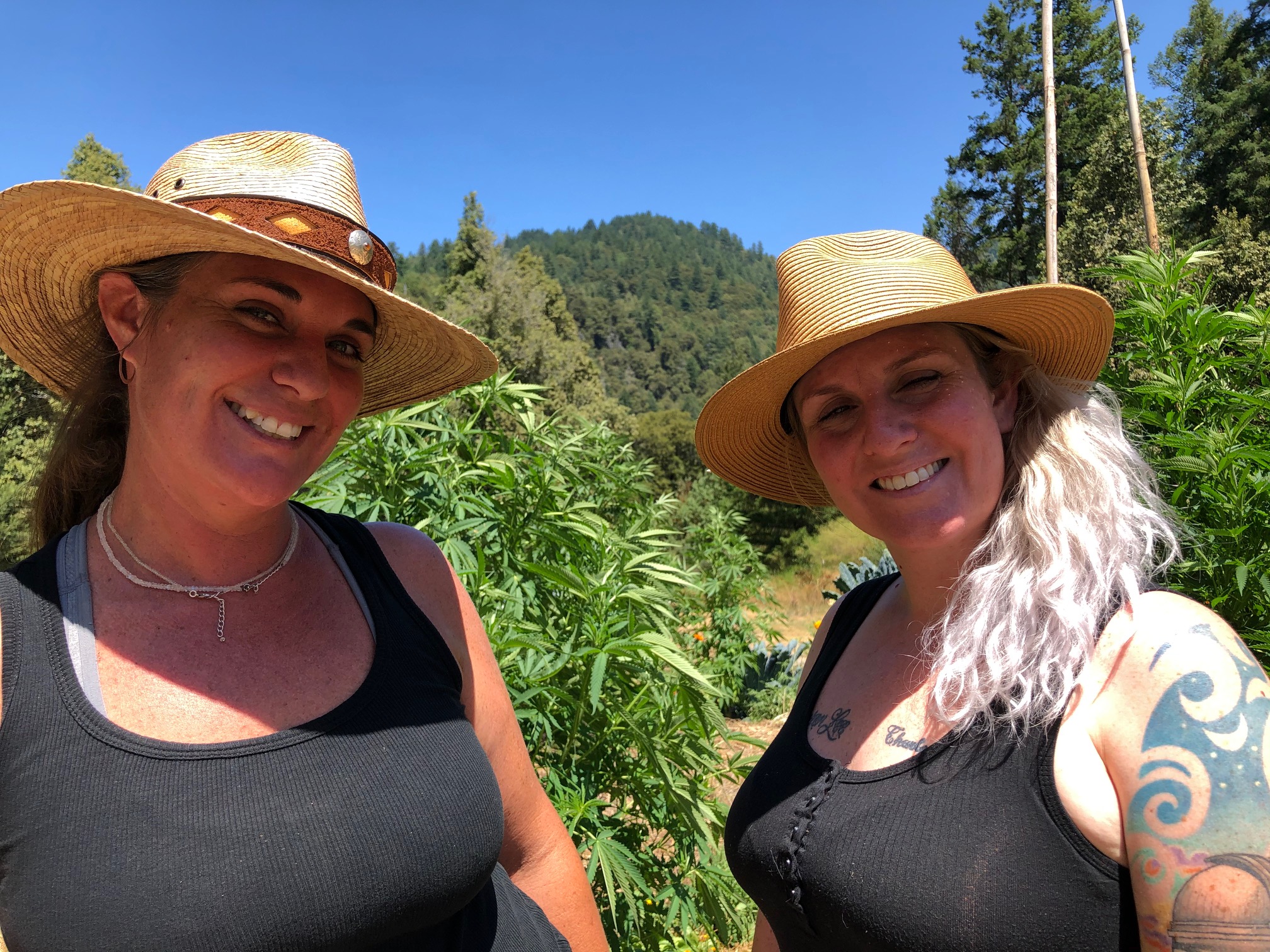 Project Trellis is a novel program meant to benefit licensed cannabis businesses through micro-grant, local equity and marketing and promotions programs, but the county’s first attempt to deliver money via its micro-grant arm is coming with some noteworthy hiccups.

The difficulties stem from a lack of clear and accurate information in the grant application instructions, miscommunication from project staff to applicants and the lack of a sufficient screening or redirecting process for off-target applications.

Thomas Mulder sits on the first ever Project Trellis Micro-Grant & Loan Advisory Committee, and he attributed the complications to “growing pains,” when reached by phone on last week for comment on the program’s most notable snafu — the Board of Supervisors’ approval of the sole $50K grant award to a single business entity, namely Five Sisters Farm.

Back on May 19, 2020, the BOS approved the award nearly $180,000 in grant money to 14 businesses on the Committee’s recommendation — thirteen $10,000 grants and one $50,000 grant, with the larger grant being designated for co-operatives and associations.

(All three arms of Project Trellis — the grant, equity, and marketing and promotion programs — are funded by Measure S, local tax revenues from cultivators, cannabis fines and fees. The equity program is also funded by an equity grant from the State of California.)

Given the vague descriptor “co-operatives and associations” used in the 2019 grant application form and application instructions, the county’s Economic Development Division (EDD) attempted to provide clarification of “association of cannabis businesses” in its 2019 Project Trellis FAQ Addendum:

“Please explain the difference between individuals and co-operatives (co-ops) or associations.

Here is the crux of where things went south in regards to the $50,000 award approval. The EDD administers Project Trellis and coordinated the 2019 grant application acceptance and review process. The EDD received applications from the community in late 2019, then passed 71 of these applications to the Committee to review, rank and score. (The Committee consists of five members appointed by the BOS, plus two at-large members.)

The Five Sisters Farms (FSF) application for the $50,000 grant was passed to the Committee for review, and was subsequently recommended to the BOS as the $50K application that should be approved for the award. In fact, the BOS approved grant awards for all 14 of the committee’s recommended applications that night, with the only debate centering on Committee dynamics. (Look back at Lost Coast Outpost coverage.)

Five Sisters Farms requested Project Trellis grant funding in order to renovate an existing permitted barn and drying facility into a processing facility. Given that Five Sisters Farms is nestled along Highway 101 at the Cook’s Valley/French’s Camp area at the Humboldt-Mendocino county line, Owner-Operator Season George believes her facility is well-situated in regard to eventually welcoming the public at her working farm and intended processing facility.

After finding out about the BOS approval of the Five Sisters Farms grant award from another community member in the days after the May 19th meeting, George received an email from the EDD’s Director of Economic Development Scott Adair on May 27th stating that after the application received more scrutiny by a Committee member, he needed George to confirm whether or not Five Sisters Farms is a co-operative or an association.

After responding that Five Sisters Farms is indeed part of a business association, Adair said county counsel would be reviewing the matter. On July 22nd, Adair emailed George again to tell her that because Five Sisters Farm is an individual business entity, “[I]t would not be eligible for the $50,000.00 grant which is intended for those who applied as a Co-Op or a Road Association.”

It was a frustrating and disheartening development for George, especially since learning of the public approval of the grant award by the BOS back in May. (It is worth noting, the agenda item that night included a disclaimer stating that the County Administrative Officer would be approved to sign the grant agreements only “after review and approval by County Counsel and Risk Management.”)

George pushed back, citing the vague language in the FAQs and the omission of the need for associations to be literal Cannabis Cooperative Associations or Road Associations anywhere in the grant application instructions. Furthermore, it was clear in the application materials that her business is a single member LLC, so how did the FSF application get so far along in the process for the $50K grant if it was destined to be deemed ineligible?

Fast forward four months to this past Tuesday, November 17, 2020. At their regular meeting, the BOS unanimously voted to approve the revision of the Five Sisters Farms Funding Recommendation. The solution to the snafu was for “Five Sisters Farms to complete its formation of a Cannabis Cooperative named the SoHum Farm Co LLC (a domestically registered Limited Liability Corporation), and to relinquish any claim on the grant award and to acknowledge that, after formation of its new Cannabis Cooperative, the $50,000 recommendation of funding would be changed from Five Sisters Farms to SoHum Farm Co LLC.” (Quote from the related staff report linked on the BOS agenda for that night.)

The grant award will still be tied to the renovation of the barn into a processing facility, and SoHum Farm Co will have to provide proof of completion of the agreed upon renovation details to the EDD in order to receive the full $50K.

This solution was not readily offered by Adair, however. It only came about after George petitioned for the help of Supervisor Estelle Fennell and the support of the local business community. George had to push hard to get the award approved (again), and she is at least glad that her ordeal will hopefully be avoided by future grant applicants, since the EDD has tightened up its language around eligibility requirements for the $50K grant.

Money In-hand for the Rest? Not Quite Yet

At the time of this, The Project Trellis website claims that “Fourteen companies out of seventy-one applicants received a total of $179,658 with awards ranging from just under $10,000 to $50,000.”

This claim is untrue. On Tuesday, November 17, County Economic Development Specialist Peggy Murphy stated the following via email: “Five awardees have received funds, one has returned all documentation and those documents are being processed for payment, five are in need of returning documentation to Economic Development Staff, two have not responded to award notifications, and one is Five Sisters Farm, now SoHum Farm Co.” 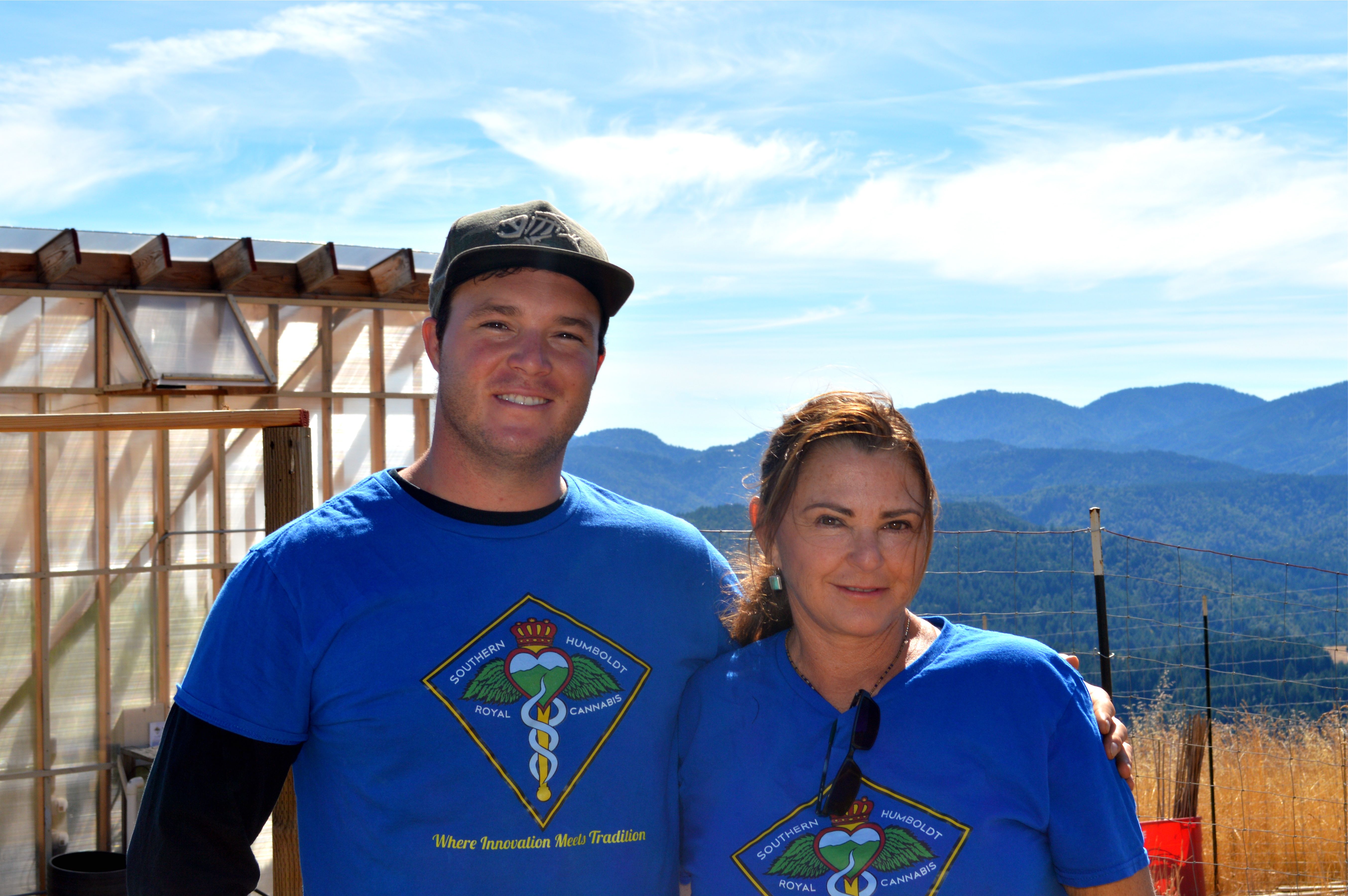 Sean Stamm and his mother

Sean Stamm of SoHum Royal Cannabis is one business-owner still in the process of acquiring his grant award. In Stamm’s case, the $10,000 award to his cultivation business has not been dispersed because he decided to switch contractors for the proposed infrastructure project. Stamm will have to provide documentation of a formal estimate from the new contractor in order to finalize his Project Trellis agreement, then he will have to submit a funding request for the Auditor-Controllers Office, which actually issues the check.

Stamm says, “It’s taking some time to get it all straightened out,” but the money will be worth the wait and time spent on the grant application and following up with county staff. Noting that he is happy to get back some of the cultivation tax he pays (on the order of $37,000 annually), he says the cultivation tax expense imposed by the county actually takes away from the fiscal resources cultivation businesses need to make their properties cleaner and more sustainable.

Joel McClure of Bridges Academy Farms – Doja Gold has received the bulk of his $10,000 award — he’s gotten $9,000 and looks forward to the remaining $1,000 upon proof of completion of the approved project. It was a protracted process for him as well, considering time lost because the person assigned to facilitating the dispersal of his funds was using the wrong email address, the expected Covid chaos and delays, and the lack of notification that the award was even approved (something Stamm mentioned as well).

Like Stamm, McClure says the award is worth the time and effort, both on the application itself and on the process of getting the funds, although he hopes that EDD staff will better prepare potential awardees for the process of actually getting awards in-hand. 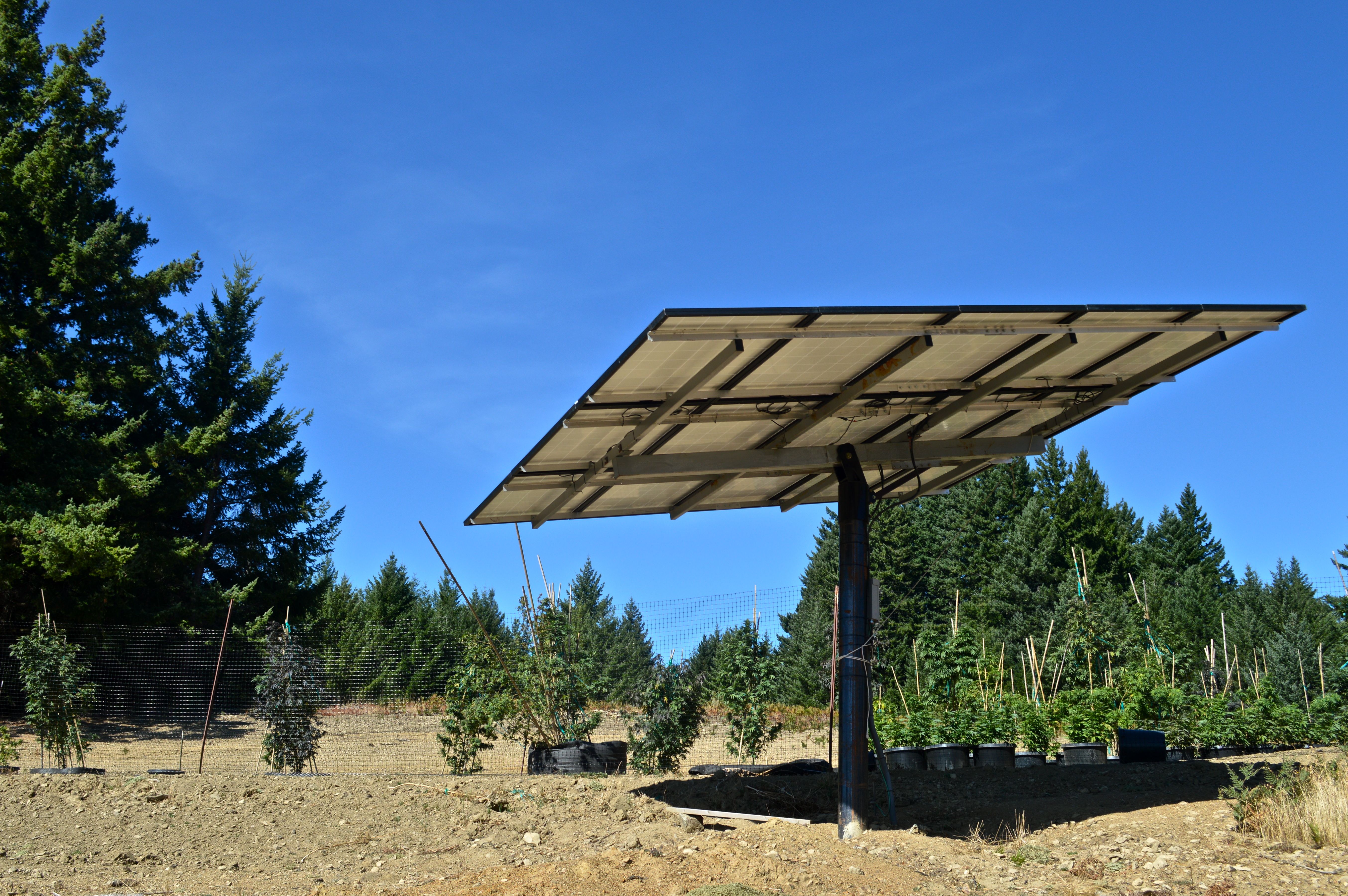 Applications for the second competitive round of micro-grant funding through Project Trellis are being accepted till December 18. The new Project Trellis website and application materials have more refined language in regards to the types of associations eligible for $50,000 grants, namely, Cannabis Cooperative Associations as set forth in California Business and Professions Code § 26220 et seq., Road Associations, Road Maintenance Associations, as described by Humboldt County Code Section 314-55.4.12.1.8.4, and Humboldt County Nonprofit Organizations.

This fact was not clear to one local manufacturing company owner, who prepared and submitted a $50,000 grant application for a branded product line featuring locally sourced cannabis. Not only was the applicant told by the EDD that an association merely meant a group of at least five Humboldt cannabis licensees (including the applicant) being involved in and directly benefiting from the proposed project, at no point was the applicant told their proposal was ineligible for the requested grant amount. The applicant even received follow up questions via phone and email after submitting their proposal. (Disclaimer: This reporter helped prepare this particular grant application.)

It is unclear how many of the 71 applications reviewed by the committee during that first round would have ultimately been deemed ineligible for award.

It’s Supposed to be a Good Thing

“The county could take this money and pay for more law enforcement,” Mulder says, “but they’re taking this money to bolster up the cannabis industry to the best of their ability.” Nothing new is perfect, he continues, especially when you throw cannabis into the mix.

For the first round of Project Trellis micro-grant awards, local cannabis business people spent untold hours preparing and submitting grant applications. Committee members reviewed all 71 applications passed to them from EDD staff, when some were clearly ineligible for award. (Mulder says he spent on the order of 90 hours working on that first round of grant applications, including trips to Eureka for meetings.) Awardees are spending many hours in the aftermath, working out the details of what it takes to get the money.

A more refined process and clearer definitions will certainly save time and money for business people pursuing the current round of Project Trellis awards, for county staff, and for the volunteers on the Committee tasked with reviewing the applications. It is safe to say that County Supervisors and the broader community of licensed cannabis businesses want to see the program run smoothly and successfully. We can expect to see how the second round will play out sometime in the spring.