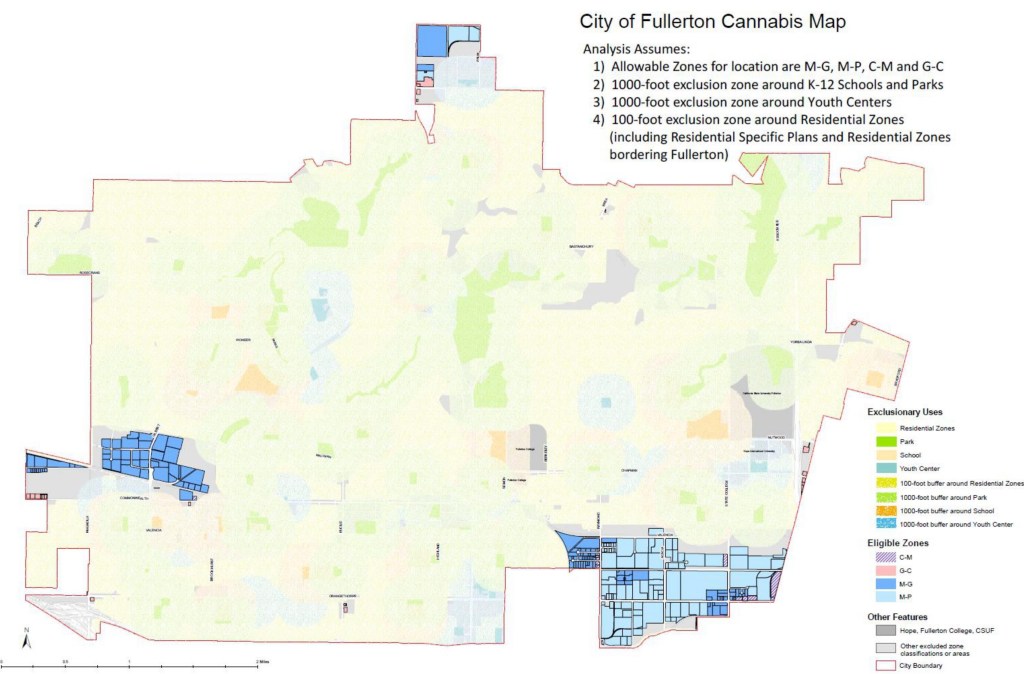 Fullerton’s City Council has tabled, for now, a proposed law that would allow regulated marijuana dispensaries, manufacturers and other business types in some of the city’s commercial and industrial areas.

During a meeting Tuesday, Oct. 20, the council voted 4-1 to delay a decision on the ordinance. Some council members argued more study and community outreach must be done to avoid the negative impact of shops, while others contend the move simply kicks an inevitable issue down the road.

California voters in 2016 passed Prop. 64, which legalized cannabis for recreational use by adults 21 and older. State law lets local leaders decide whether to allow – and tax – sectors of the industry, such as recreational or medical shops, cultivation and distribution, within cities or counties.

Fullerton leaders were looking at allowing up to five retail storefronts, licensed by the city, to sell cannabis products. Smoking would not be allowed on-site.

Marijuana manufacturers, distributors and indoor cultivators – up to five of each type – and an unlimited number of testing facilities would also be allowed under the proposal.

Such businesses would be allowed mostly in Fullerton’s industrial zones and only in certain commercial areas with buffers around schools, parks and neighborhoods.

Mayor Jennifer Fitzgerald said shops could bring crime and other problems to Fullerton, adding that more community outreach needed to be done so residents were aware of the ordinance’s potential impact.

“We need to understand better and make a more sincere and holistic approach at working with the community to figure out how to deal with the new state laws,” Fitzgerald said.

In a recent city poll, a majority asked in each of Fullerton’s five council districts supported “allowing, regulating and taxing the sale of cannabis products” in the city.

Councilman Ahmad Zahra said the city has done its due diligence and held several well-attended community outreach meetings throughout the year. By establishing rules, the city could curb the current problem of illegal, unregulated dispensaries, he said.

“We have to deal with this, because (cannabis) is legal in California,” Zahra said. “By tabling it, or by ignoring it, all we’re doing is putting our head in the sand, like an ostrich. That is not good governance.”

District 3 Councilman Jesus Silva, who gave the only no vote, said a proposed map that wouldn’t allow dispensaries within 100 feet of homes, is “exactly what the community’s been fighting for.”

“I think this would be away to manage it, control it and get rid of most of these illegal activities that have happened and occur with these illegal shops,” Silva said.

It’s not yet clear when the proposal could appear again before the council.

In Orange County, only Santa Ana allows shops to sell cannabis for recreational use. The city licenses a maximum of 30 dispensaries to set up at least 1,000 feet from homes, schools and parks, and they must be 500 feet away from each other.

This year, the financial stress caused by the coronavirus pandemic has pushed local governments around Southern California to consider the tax revenues the industry could bring to city coffers.