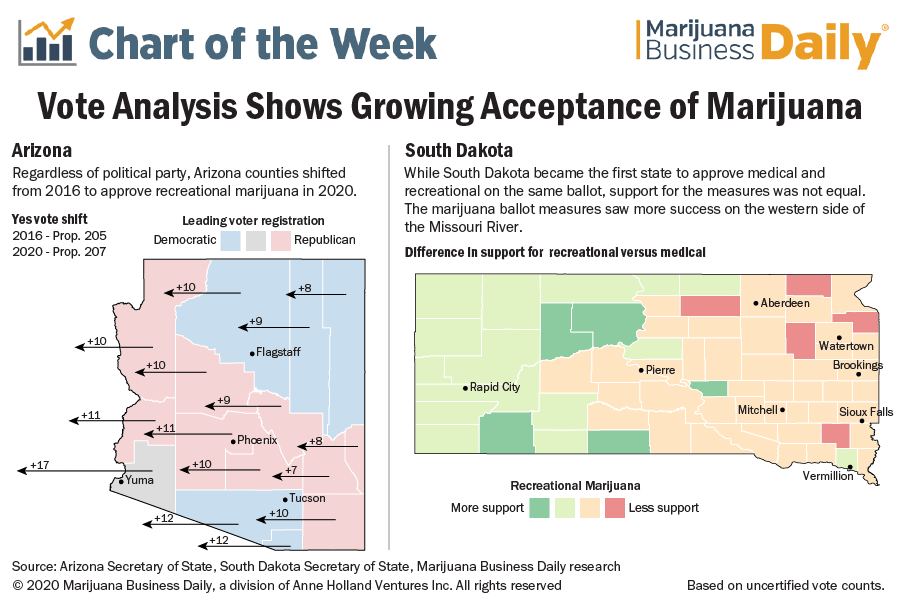 Learn more about the state of the industry at MJBizCon 2020.

An analysis of votes cast for marijuana ballot measures in 2020 shows that while voters remain divided over legalization based on political affiliation and geography, the overall electorate has shifted in favor of accepting both medical and adult-use cannabis.

The trend should help efforts in New Mexico, New York, Pennsylvania and other states looking to legalize in the coming years.

Arizona provides a great opportunity to look at the changing voter sentiment over the past four years.

In November 2016, Arizona was the only state where a marijuana ballot initiative failed.

Fast-forward to the 2020 election on Nov. 3: Arizona shifted 11 points, with 60% voting overwhelmingly to pass the adult-use legalization measure, Proposition 207.

And while Arizona is often seen as a red-leaning state, its counties are divided between Democratic and Republican control.

Party affiliation didn’t seem to matter this year, however: All 15 counties shifted at least 9 percentage points in favor of legalization over the past four years.

Yuma County, which borders California at the southernmost part of Arizona, saw the largest shift in favor of legalization, amounting to 17 points.

The county is the only one in Arizona where independent voters are in the majority, with 35% of Yuma’s voters classifying themselves as something other than Republican, Democrat or Libertarian.

The county did see more Republican registrations leading up to the 2020 election.

In general, counties with a higher percentage of independent voters, such as Yuma, did experience the largest swings in favor of marijuana legalization.

Without exit polling, however, it’s difficult to pin down if independent voters were indeed behind the overall swing in Arizona.

Maricopa County, home to two of Arizona’s largest cities, Phoenix and Mesa, represents 60% of the registered voters in the state.

Much like large parts of the United States, Maricopa County tends to be more Democratic in the urban core, near downtown Phoenix, and more Republican in the suburban outskirts.

The county also is home to cities such as Tempe, near Arizona State University, where legalization has generally enjoyed strong support.

And Maricopa counts retirement communities, such as Sun City, where legalization historically has encountered strong opposition.

This divide can be seen in the voting patterns for 2016.

And while the divide remains in the 2020 map, Maricopa voters overall were more approving of the new legalization measure. 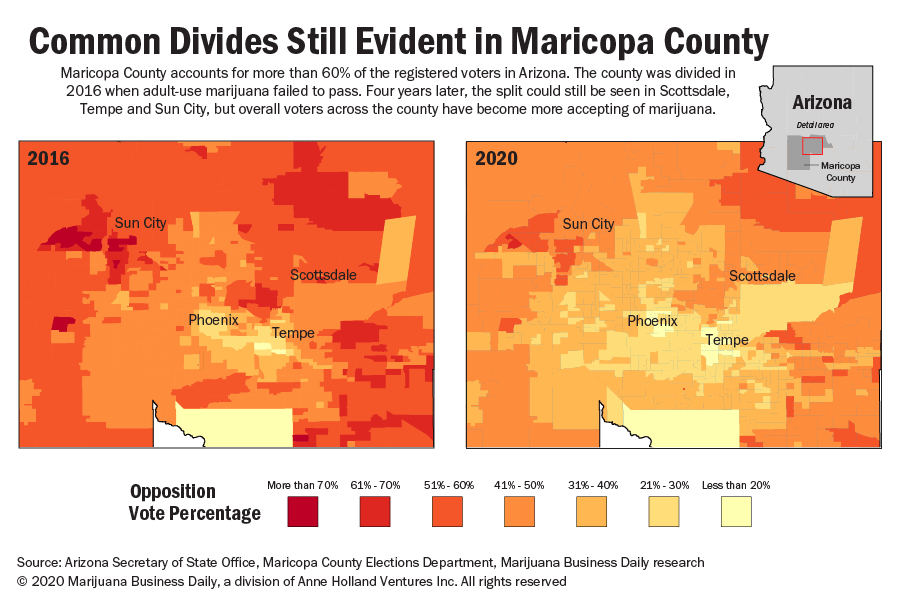 The case of South Dakota

South Dakota, meanwhile, became the first state to approve medical and recreational marijuana on the same ballot. But support for the measures was not equal.

Mississippi saw similar support this year for its medical measure, which passed by almost a 70%-30% margin.

South Dakota’s voting trend can mostly be explained by geography.

Support for marijuana split down an already natural and political divide for the state, the Missouri River.

Geography also played a part in Montana’s acceptance of recreational marijuana this year.

Urban voters, who are located mostly on the western side of the state, in Missoula and Great Falls, voted to support the measure, while sparsely populated eastern Montana voted against. 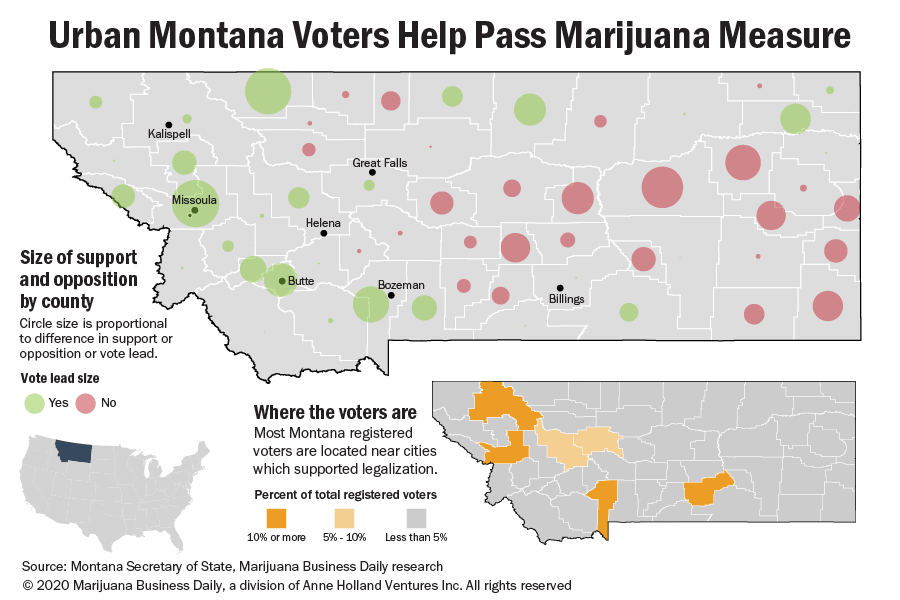 New Jersey was the most unified of the states to consider marijuana this year.

The small but populous state, located on the Eastern Seaboard, overwhelmingly supported recreational marijuana in 2020.

While New Jersey’s support was statewide, an urban/rural split did emerge, with areas containing clusters of cities of 10,000 people or more showing greater support than those without.

The least support for recreational marijuana came from Ocean County on the Jersey Shore.

But even there, 60% of the voters in the county approved the ballot measure.

Camden County, which borders Philadelphia, showed the most support, with 75% of voters approving. 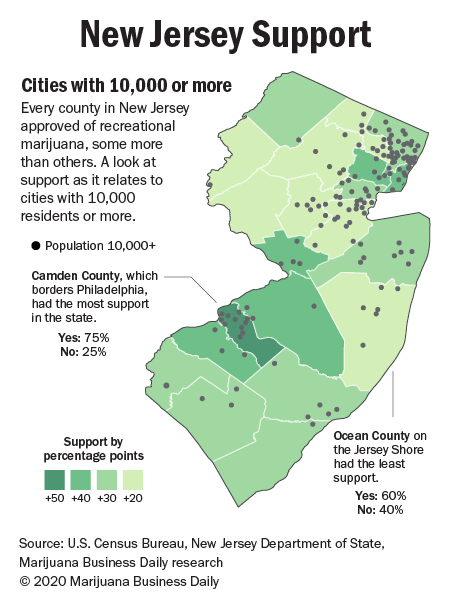 Andrew Long can be reached at [email protected]